Idaho is the 14th largest and the 13th least populous of the all U.S. states. Boise, the capital and largest city, is one of the best state capitals to live in thanks to its low cost of life, low crime rate, and breathtaking nature

Idaho is a quite mountainous state. The United States Forest Service holds the highest percentage of any other state about 38% and there are vast swathes of protected land. Idaho holds an abundant supply of natural resources. Forestry, agriculture, mining and manufacturing are the most developed industries in the state.

The locals here love spending time outdoors and if you’re a fan of rafting and water sports, you already have Salmon River and Snake River in your bucket list.

Winter sports are well represented in Idaho. Hailey, Idaho, a small city in the Wood River Valley, is a hometown of the the 3rd largest snowboarding publication in the world Snowboard Magazine, which was founded by the local resident Mark Sullivan in 2004.

Idaho printed media is represented by a dosen daily and many more weekly and monthly publications. Below you can find the list of the most popular newspapers of Idaho:

The paper was founded as Idaho Tri-Weekly Statesman in 1864 by James S. Reynolds, who later, sold it to Judge Milton Kelly. Kelly expanded the paper to a daily publication and changed the name to The Idaho Daily Statesman. In 1888, Kelly sold the newspaper to the Cobb family who ran it for the next 70 years. Federated Publications and Gannett owned the paper for 34 years and sold it to Knight Ridder in 2005. The following year, Knight Ridder and the Idaho Statesman were bought out by The McClatchy Company who publishes the newspaper to this day.

Throughout its 157 years of history, Idaho Statesman served as a primary source of news and information for Idahoans. To this day, the paper is a vital service, connecting people from Idaho to their community and the world.

Idaho Statesman campaigns viciously in support of environmental causes and wilderness preservation. Sport news also became an extensive part of the paper’s growth with the arrival of the Steelheads hockey team and the rebuilding of the Boise State Broncos in the 90s.

Today, the Statesman’s reporters and photographers broadcast from the scene of the news, sending their stories, photos and videos from smart gadgets, alongside with readers who send photos, texts and tweets and offer their own take on the news in real time.

You can find the Idaho Statesman online at: https://www.idahostatesman.com 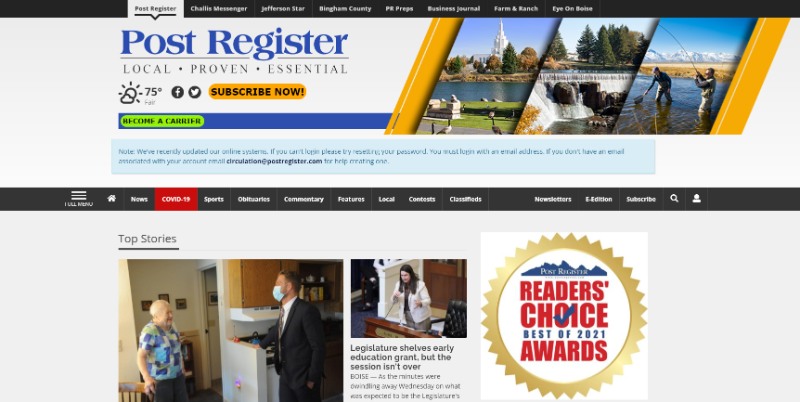 Post Register started its story as a merger of Daily Post and Times Register. Robb and Jerry Brady were some of the paper’s first editors. The Post Register published its first online edition in 1995. The Brady family maintained control of the newspaper and several other media assets until 2015, when they sold the company to the Adams Publishing Group, who maintains The Post Register to this day.

Throughout the years, Post Register has won several awards, including the Scripps Howard Foundation’s First Amendment prize for an exposé on pedophilia in scouting, and the Livingston Award in the category of local reporting for the journalist Peter Zuckerman, on the same story.

The paper prides itself with a complete online version containing all of the content from its print version. The Post Register provides breaking local, national and world news, as well as local advertising to an audience of more than 60,000 people. 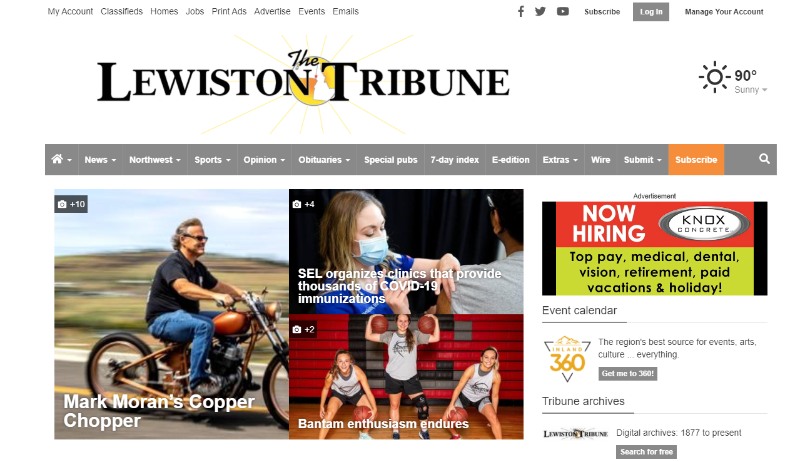 The Lewiston Morning Tribune was founded in 1892 by Eugene L. Alford and Albert H. Alford, who acted as editor. The edition started its journey as a weekly newspaper and became a morning daily newspaper in 1898.

As a family run newspaper, Lewiston Morning Tribune had three generations of editors. When Albert died in 1928, his nephew Albert L. Alford assumed the position and worked for the paper for 43 years, until his death in 1968. His son Albert Larson “Butch” Alford succeeded him as the third publisher of the Lewiston Morning Tribune.

In 1981, Butch Alford sold the two-thirds of the Tribune’s stock to TCI Newspapers of Denver, but several years later, in 1997 he repurchased it from TCI. Today, he is still the owner and president of the Lewiston Morning Tribune.

The Tribune is known among its readers as the first newspaper in Idaho to launch an electronic edition (September of 1995). LMTribune.com continues to improve its web presence and remains a major source of news, local and national, and advertising. 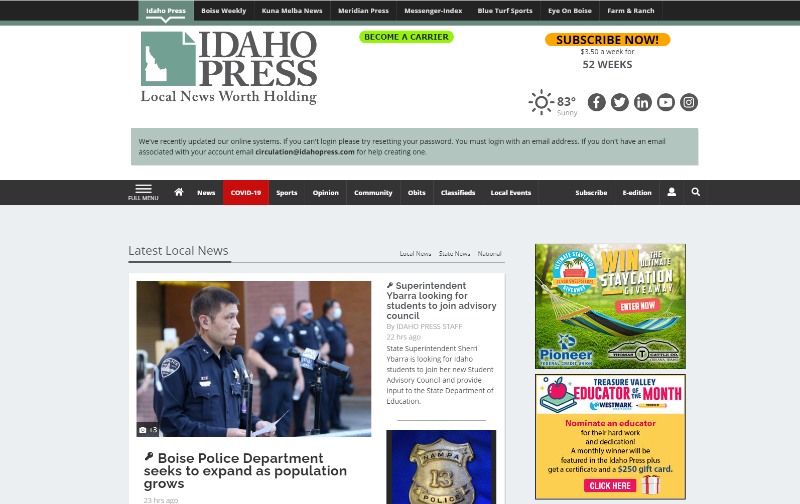 Founded in 1883 as the Caldwell Tribune, The Idaho Press-Tribune is the second-oldest active paper in Idaho. Even the Nampa city was established two years later in 1885. In its early days, the newspaper was often used as an instrument for political influences. Governor Frank Steunenberg was оne of the first owners and editors of the Idaho Press-Tribune.

After joining the portfolio of the Adams Publishing Group, the Idaho Press and its partner papers reach more Treasure Valley residents than any of its competitors. Today, the paper in its print and digital version is a major source of local news, sports and community information, as well as for state and national news for the entire Treasure Valley area.

Visit the online version at https://www.idahopress.com.

The paper began publication in 1904 as the Twin Falls Weekly News. Today, the Times-News is available throughout the Magic Valley region of south-central Idaho, and in some areas of Elko County, Nevada, as far south as Wells.

The Times-News is considered as a main source of news, information, and advertising for readers and online audiences in Idaho and the surrounding areas. Readers can find daily local, national and international news on a variety of topics business, politics, crime, sports, lifestyle and much more.

The Times-News digital edition is available at: https://magicvalley.com. 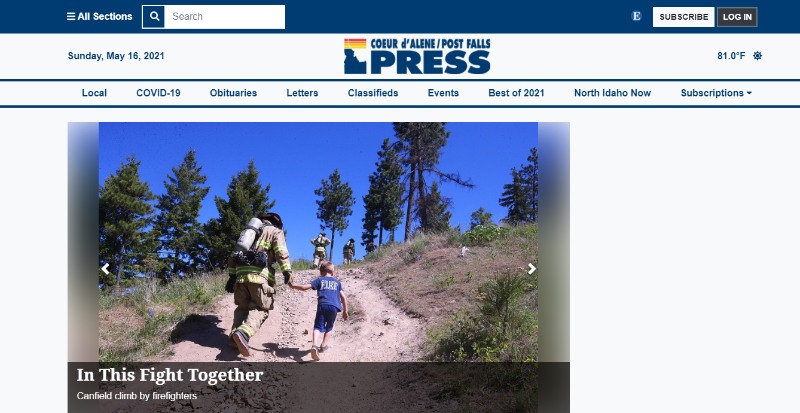 The Coeur d’Alene Press is a member of the Hagadone Corporation family. The paper is published under the ownership of Duane Hagadone and the Hagadone Newspaper Network.

Hagadone is popular for finding the Coeur d’Alene Resort and Golf Course in northern Idaho. He is honored with the title Idaho Business Leader of the Year by the Alpha Kappa Psi fraternity of Idaho State University in Pocatello in 2006.

You can access the Coeur d’Alene Press online by visiting https://cdapress.com.

Its history began in 1890 when C.E. Arney started the paper as a political publication called the Pocatello Tribune. In 1893, it became a weekly printed newspaper. This continued several years, until it started daily publication on March 17, 1902.

The Idaho State Journal can pride itself as an edition with a great readership, covering everything from news, life, culture, entertainment, to local events in Pocatello, Idaho and the southeast areas of the state.

The Idaho Mountain Express was founded on 27 November 1974 by a small group of people with the mission to provide its readers with a watchful and diligent press.The paper’s goal is to serve the public interest with objective and fair reporting.

Almost 50 years later, The Idaho Mountain Express is a premier source of trusted information and news for the citizens of the greater Sun Valley area and the Wood River Valley. The publication offers an open forum for debate on environmental preservation, solid land-use planning, local governance and a vibrant guest economy.

The Idaho Mountain Express has a printed version published every Wednesday and Friday, as well as an online edition, available at: https://www.mtexpress.com. 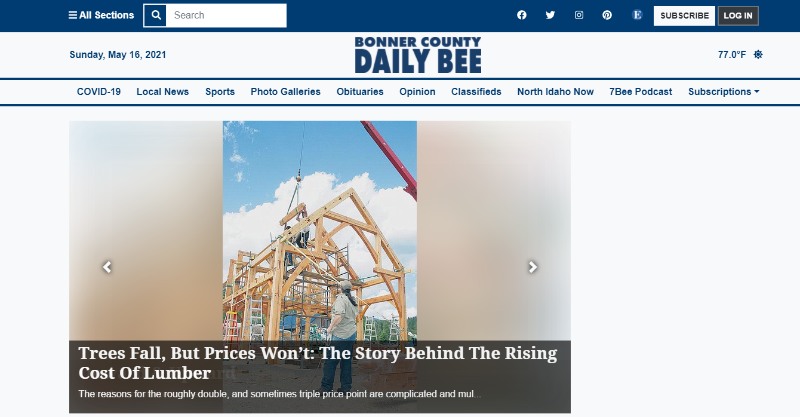 The Bonner County Daily Bee is a daily newspaper serving Bonner County and North Idaho. It was established in 1965 by Pete and Adele Thompson, who believed they could provide the region with a great newspaper. The paper was recognized as one of the best small daily papers in the country, as well as one of the fastest growing one in the area.

The paper was honored with many regional and national editorial awards, including an AP award for second place in the nation for coverage of breaking news. Publisher David Keyes also won second place nationally for best humorous column.

Today, the paper is available with its printed version, as well as online at bonnercountydailybee.com, where you can find last-minute local and national news, and also a great opportunity for local advertising. 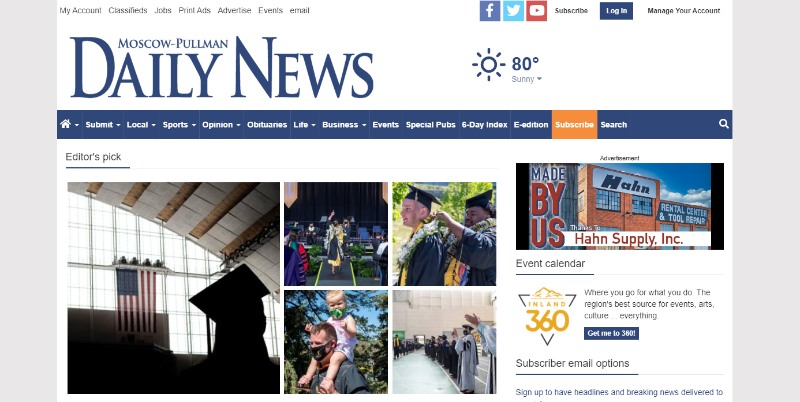 The paper’s story started with the 1905 merger of Moscow Mirror (1882) and the North Idaho Star (1887). In 1911, it changed names to Daily Star-Mirror and was later recognized as the paper’s foundation date.

Since then, Moscow-Pullman Daily News has been published continuously in Moscow for 110 years. Over time it devoured other local publications like the Moscow News Review and Palouse Empire News for Whitman County. The paper was acquired by Kerns-Tribune of Salt Lake City, Utah, which in turn was bought out by TCI in 1997. The next year all TCI’s papers, except The Salt Lake Tribune, were bought by Butch Alford.

Some notable figures of the Moscow-Pullman Daily News’s family are:

Today, the Moscow-Pullman Daily News’s mission is to provide readers with ethical, factual and relevant coverage of news and events. It is an independent, family-owned paper, which serves its customers with up-to-the-minute news, sports and information both through its printed and digital version.

Online the newspaper publishes on https://dnews.com.

Metrics are an essential component of any organization’s PR or digital marketing efforts. They are [...]

A PR report is an essential part of any company’s efforts to increase brand awareness [...]

Top Media Outlets You Should Know About Choosing the right media outlets to promote your [...]

Public relations and social media   In the highly digital age that we live in [...]

Metrics are an essential component of any organization’s PR or digital marketing efforts. They are [...]

A PR report is an essential part of any company’s efforts to increase brand awareness [...]

Top Media Outlets You Should Know About Choosing the right media outlets to promote your [...]

Public relations and social media   In the highly digital age that we live in [...]

Top Media Outlets You Should Know About