Colorado is home to expansive natural wonders – rocky mountains, vast forests, sand dunes, waterfalls and crystal clear lakes and rivers. If you love outdoors and extreme sports, there aren’t many better places to be than Colorado.

The state is also known for the Four Corners Monument, Pikes Peak, the Supermax prison facility, holding some of the world’s most notorious terrorists and drug lords, and interestingly enough, inventing cheeseburgers.

If you want to advertise in Colorado, the following 10 newspapers are the first ones you want to check out.

The Denver Post is the biggest and most circulated newspaper in Colorado. It serves more than 720,000 people living in the state capital Denver and the nearby areas.

It’s one of the most authoritative newspapers – not only in Colorado, but the entire country. The Denver Post has won a total of nine Pulitzer Prizes between 1964 and 2013, as follows:

In more recent years, the paper has faced internal turmoil as its owner – the Alden Global Capital hedge fund – has conducted a massive downsizing of the newsroom. Staff was reduced to 70 people in 2018, compared to 250 in 2010, before the paper was bought out. Denver Post openly rebelled against its owners, calling them “vulture capitalists” who were “strip-mining” the newspaper for profit.

Today, The Denver Post is still the top newspaper in Colorado, though much of it’s readership has moved on to the digital publication at http://www.denverpost.com

The Gazette brings vital news and information to more than 100,000 readers in Colorado Springs and El Paso County.

A fun legend: In December 1955, the local Sears store advertised a 24/7 phone line, where children could call and talk to Santa Claus. Somehow, the phone number was misprinted and thousands of children ended up calling the Continental Air Defense Command Operations Center in Colorado Springs instead. This marked the start of the annual NORAD tracking of Santa’s sleigh as it makes its way around the world.

Today, you’ll find the Colorado Springs Gazette both on the news stands and only at http://www.gazette.com

Pueblo Chieftain is the oldest daily newspaper in Colorado. It serves the residents of Pueblo County, as well as most of Southeastern Colorado.

Most of the newspaper’s recent history has been governed by a single man. Robert Hoag Rawlings worked for the Pueblo Chieftain for 70 years. He spent 37 of them as editor and publisher of the Chieftain, as well as chairman of the Star-Journal Publishing Corporation which owned the paper. After his death in 2017, the newspaper was sold according to his will and the proceeds went into the Robert Hoag Rawlings Foundation, which has helped the communities around Southern Colorado since 1988.

The current owner is Gannett, which publishes more than 560 community newspapers, including 124 dailies, along with more than 485 affiliated websites.

Most readers these days have transitioned to the digital version found at http://www.chieftain.com 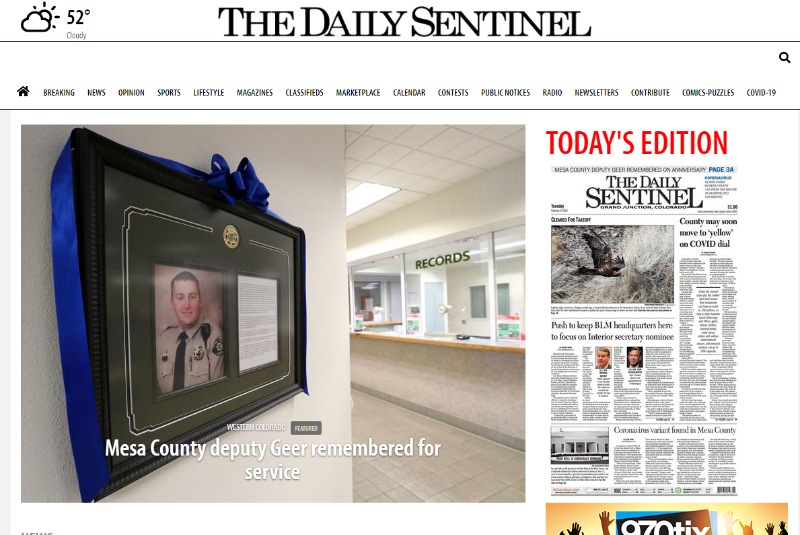 With more than 125 years of history the Grand Junction Daily Sentinel distributes in six counties in western Colorado, bringing daily news and information to more than 150,000 residents in Mesa and neighbouring counties.

Since 2009, the newspaper has operated under Kansas-based Seaton Publishing Co, with many of the Seaton family members acting as higher executives in the publication.

Since 1998, the newspaper also publishes digitally at http://www.gjsentinel.com

Boulder Daily Camera is the main source of news, information and advertising in Boulder and Broomfield counties.

You can also access the Daily Camera online at http://www.dailycamera.com

Fun fact: Coloradoan is the deprecated term for Coloradan – a resident of Colorado. That said both the term and the newspaper are highly popular.

Fort Collins is the fourth most populous city in the state with more than 170,000 residents and only one daily newspaper. This makes the Coloradoan the most trusted local news source in Northern Colorado. In fact, local news are the main focus of the publication, syndicating national news from USA Today

The City of Greeley and The Greeley Tribune were founded by the same person – Nathan Meeker – an agricultural writer for Horace Greeley, founder and editor of the New York Tribune.

The Greeley Tribune is the only local news paper, serving more than 100,000 residents of Weld County in Northern Colorado.

In 2019, the newspaper switched from a daily publication to running four times a week, due to the shrinkage of the printed media industry.

The online publication is updated daily. Visit the Greeley Tribune at http://www.greeleytribune.com

The Longmont Daily Times-Call is one of the victims of the downsizing printing industry. Formerly the proud source of local news and information for 86,000 Longmont residents, today it republishes most of its content from sister publications owned by the same parent company.

The newspaper is owned by Prairie Mountain Publishing – a subsidiary of Digital First Media itself controlled by Alden Global Capital. In 2017, the company abandoned the Longmont office and moved the publication to the HQ of the Boulder Daily Camera, also owned by the same group.

You can find the Daily Times-Call online at http://www.timescall.com

Reporter-Herald brings local and national news daily to 79,000 residents of Loveland, and also broader areas in Larimer and Weld Counties in Colorado.

The paper was part of Lehman Communications, along with several other prominent Colorado publications, before the company was acquired in 2011 by Prairie Mountain Publishing. Previously based in Loveland for more than 100 years, the newspaper moved its offices to Berthoud, Colorado in 2017.

The Aspen Times is a free daily newspaper – the oldest and most trusted in the ski-resort town. It focuses predominantly on local issues is Aspen and Pitkin county, but sees wider distribution up to Carbondale in Garfield County.

Online, the Aspen Times publishes using a common platform to all Swift publications. You can visit the website at https://www.aspentimes.com/

We broke down the top ten newspapers in Colorado, however, there are hundreds of smaller publications scattered all over the state. The Colorado Press Association has a detailed map, where you can discover dozens of member newspapers and get more information about the printing industry in Colorado.