Looking for traditional media advertising opportunities in Alabama? In recent years, newspaper readership has declined in favour of online sources. Regardless, hundreds of thousands of Alabama citizens continue to rely on newspapers as a significant source of news and information.

In order to reach them, you must capture the eye of the state’s most popular publications. Below we’ve summarized the top 10 Alabama newspapers to give you a great starting point for your media outreach. 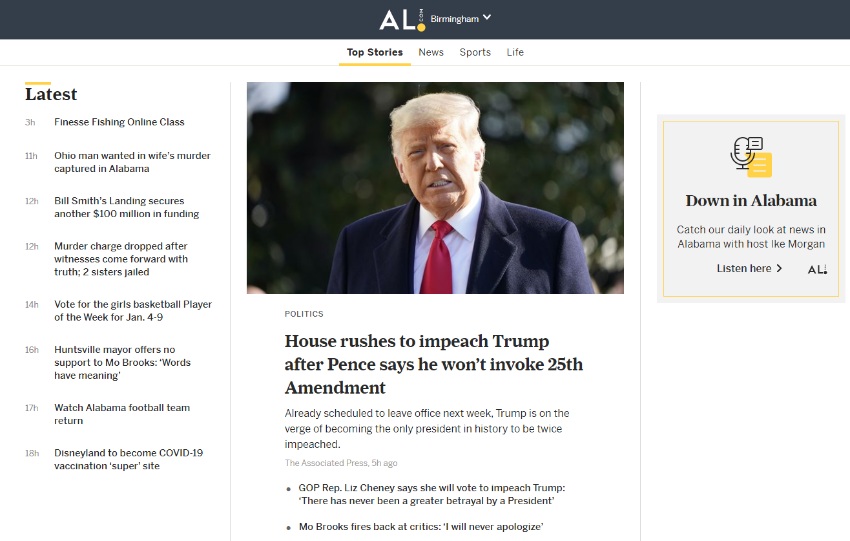 The Birmingham News is one of the largest, if not the largest newspaper in Alabama. It started in 1888, when the town was just 17 years old. Since 1956, it’s been the property of Advance Publications. Up until 2012, the newspaper was printed daily. Today, it’s published thrice weekly – Wednesday, Friday and Sunday, with a peak circulation of 176 thousand copies.

You can find it online at https://www.al.com/birmingham/. Al.com is the shared digital home of the biggest news network of Alabama, also owned by Advance Publications. 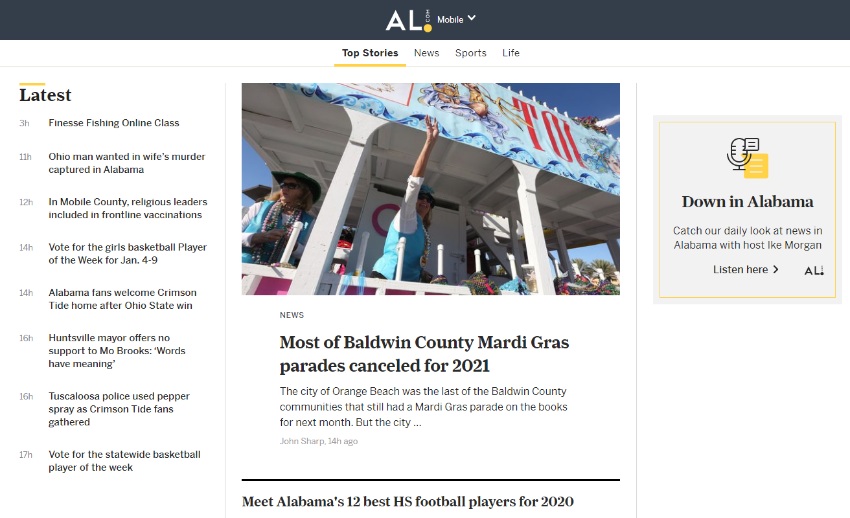 The Mobile Gazette (the original name) was established shortly after Mobile was captured from Spanish rule in 1813. It’s one of the oldest newspapers in Alabama.

Through the 2000s, the newly-built facilities endured Hurricane Ivan without interrupting production, as well as Hurricane Katrina, which left the area without power, but through proper organization with its sister newspapers, the Register continued printing.

Today, the Press-Register is owned by Advance Publications. It’s the second most read newspaper in the state with around 100,000 copies distributed three times per week. You can find it online at https://www.al.com/mobile/. 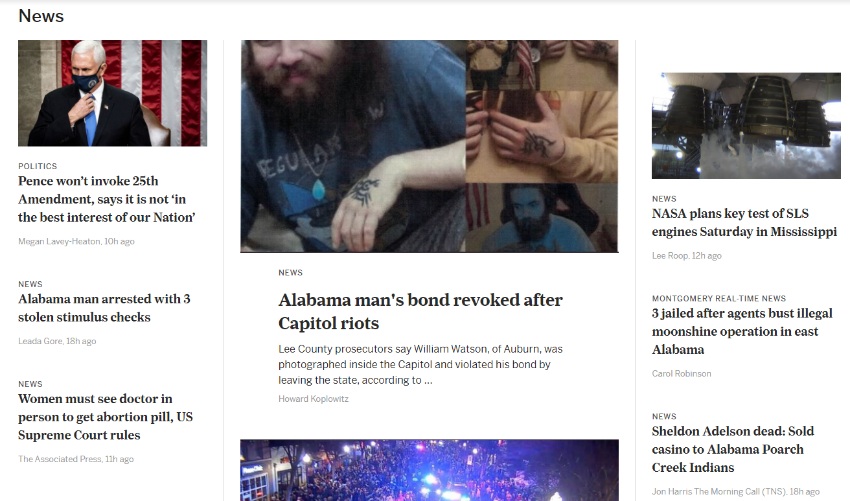 The Huntsville Times is the third jewel in Advance Publications’ Alabama portfolio. It follows the same publishing schedule as the other two.

Although it has a smaller audience, it’s particularly favoured by the military and aerospace enthusiasts. Due to its proximity to NASA’s Marshall Space Flight Center, the Army’s Redstone Arsenal, and the Cummings Research Park, the Huntsville Times has a dedicated section on advancements in biotechnology, computer science, aerospace and military technologies.

The website is https://www.al.com/huntsville/, where you can also find other local editions for Montgomery, Tuscaloosa, and Anniston.

The Tuscaloosa News is one of the oldest newspapers in Alabama. It’s property of the Gannett Company Inc, along with several other high profile Alabama newspapers. It publishes daily and since 2012 has expanded its reach from west central Alabama to also penetrate Birmingham and fill the void of daily news.

The Tuscaloosa News can pride itself with two Pulitzer Prizes. First one was awarded in 1957 for Editorial Writing. The second one is more recent from 2012 for Breaking News Reporting.

You can find it online at https://tuscaloosanews.com/

Founded in 1829 as the Planter’s Gazette, the newspaper received its current name in 1833, establishing itself as the premier local newspaper for the Montgomery area.

Throughout history it has had controversial reputation around its coverage of white supremacy and lynching, news fabrication and questionable practices. However, the newspaper was awarded three Pulitzer Prizes in the 20th century. First won Grover C. Hall for Editorial Writing in 1928. Then, Harold E. Martin won for Investigative Reporting in 1970. Finally, the Advertizer won for General News Reporting in 1988. 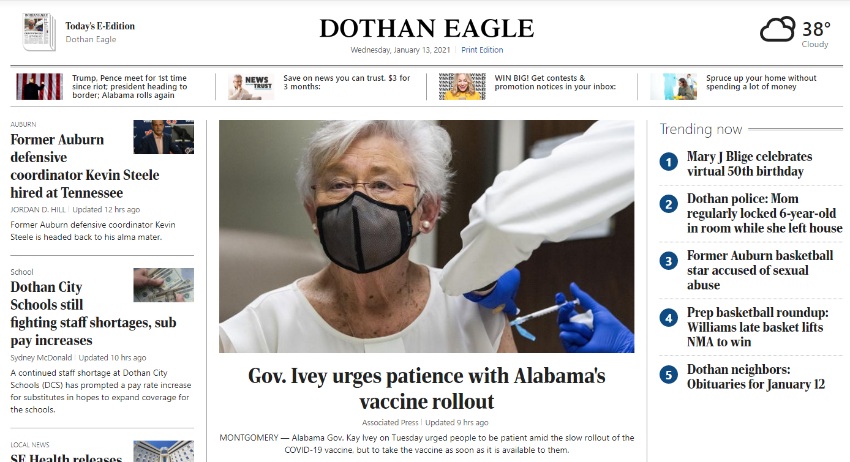 The Dothan Eagle first published in 1908. It continues to publish daily and serves the citizens of Dothan and surrounding areas. As of 2020, the newspaper is owned by Lee Enterprises, after a large acquisition from Berkshire Hathaway, including their entire publishing portfolio.

You can find it online at https://www.dothaneagle.com/ 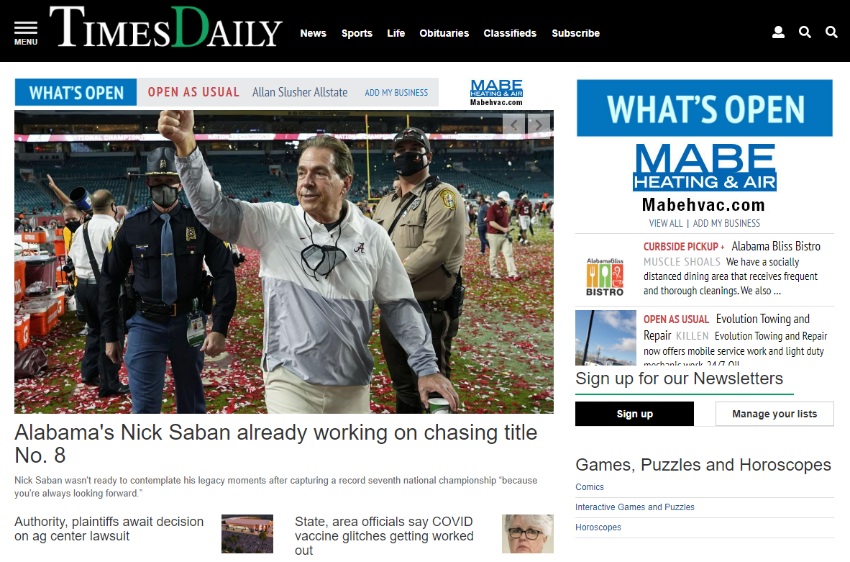 It’s owned by the Tennessee Valley Printing Co Inc – a family-owned business, along other printed properties. A digital version is available at https://www.timesdaily.com/ 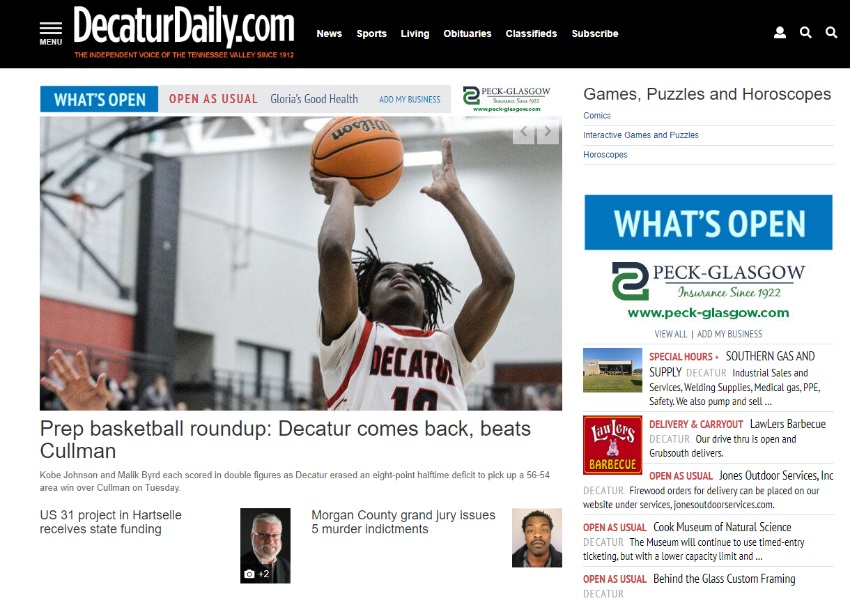 The Decatur Daily is one of the few newspapers in Alabama that are family-owned. It used to publish daily until 2018. The reduced demand and advertising revenue for printed media forced the owners to reduce the publishing schedule to five days per week, skipping Saturday and Monday. It maintains a strong presence regardless, producing more than 20,000 copies.

Visit the online version at https://www.decaturdaily.com/ 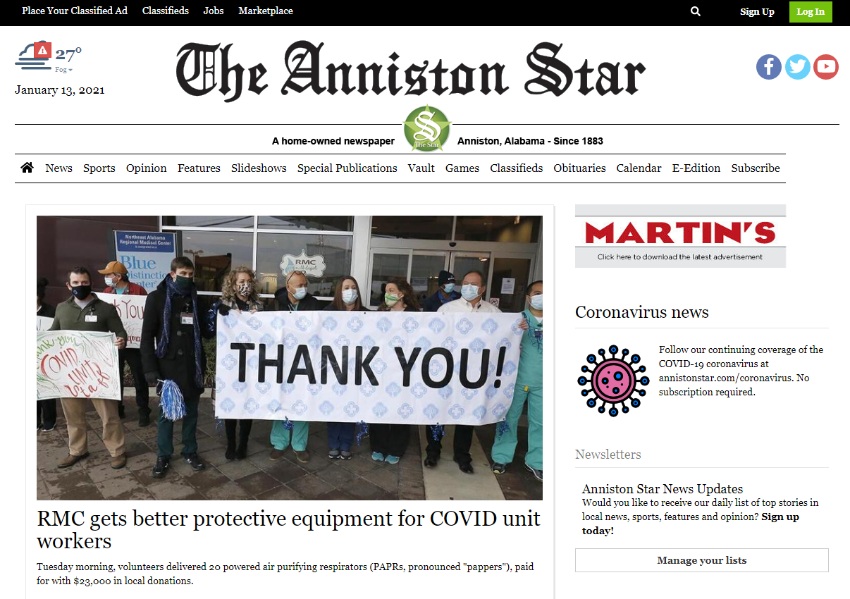 In its early history, The Anniston Star was known as a liberal newspaper, at least for the southern standard. The newspaper was edited by a succession of Ayers family members from 1911 to 2016 – more than 100 years. In 2017, as part of the #MeToo Movement, allegations for sexual harassment were filed against H. Brandt Ayers, who was by that time head of Consolidated Publishing Co.. These were partially confirmed by Ayers, who stepped down to be replaced by his wife at the helm of the company.

Visit the online version at https://www.annistonstar.com/

The Gadsden Times is a significant part of Gannett’s portfolio in Alabama, serving the city and northeastern communities of the state, reaching more than 20,000 people every single day.

For a more complete view of printed newspapers in Alabama, explore the list below.